What does Anthony Bourdain have to do with children’s theatre? Most people would say nothing, but this theatre artist would say EVERYTHING. Like most people, I only knew Anthony Bourdain from his TV shows. And like most folks, I loved the way he looked at the world, not through rose-colored glasses, but in a real and honest way, soup to nuts. He connected the food to the place, and that meant examining the good, the bad, and the ugly of those places he explored. That led him to look at the things that no other food show or travel show would ever dare to examine. Bourdain dared to include the underbelly of each place, but in an analytical way, without judgment. He trusted that we could handle it, and so he took us through the red-light district. He wasn’t talking about food in this neighborhood either, he was showing the real place, unvarnished and true.

Bourdain’s truth was his currency. Theatre also relies on truth. For my theatre’s touring production of Walking the Tightrope, our set designer created a beautiful wooden ocean pier. I insisted on adding bird poop to the pier. It became a running joke among the crew because I was so fixated on making sure that the set was covered with bird poop. I was proud of that added detail because most TYA (Theatre for Young Audiences) would never want to show that icky, even if realistic, aspect of a pier. Who wants a poopy pier, right? We do. It was an important detail if we were really trying to show the underbelly of that lovely English seafront, like Bourdain would’ve done. Without the underbelly, it’d be just another kid’s show. The kids in the audience are smart enough to recognize that there is indeed bird poop on the pier, like there is on every pier everywhere. It set the tone firmly in reality.

I related to Bourdain because he was the bad boy of food shows and I see 24th STreet Theatre as the bad boy of children’s theatre. Our work doesn’t look like what most people think of as children’s theatre. We try to push the boundaries of the TYA genre in the same way Bourdain pushed the boundaries of food and travel show genres. And that is risky stuff, especially these days, when daring to cross a line might offend someone which could go viral and send your entire world collapsing in on you. Now is not the time to be a line-crosser like Richard Pryor or George Carlin, who pushed and pushed and pushed. But Bourdain pushed in this viral time and not only got away with it, he was loved for it.

Bourdain was a modern-day humanistic explorer. Unlike Columbus or Lewis & Clark, he was an explorer who truly came in peace. He came not to take, but to give, to learn, to understand, to empathize, to honor the people in that place, whether it was a waffle house or some back alley restaurant halfway around the world. He worked hard to understand the alchemy of each culture he featured. He was full of curiosity. He was also a man of great empathy, that fleeting emotion that so many of us today are trying to recapture, that feeling of caring about the world that has been shredded over the last couple of years by our leaders. Bourdain cared. That’s why we’re so upset by his loss. The world lost a voice of inspiration in Bourdain. There aren’t many prominent voices left that we can trust in this tribal time. Even fewer still who trust us enough to give us real information without fear that we’ll change the channel.

I think if Anthony Bourdain were to do a show about heaven it’d be in-line with 24th STreet’s TYA version. It wouldn’t have the puffy white clouds or golden gates, but instead it’d look like a generic foreign city, both grungy and inviting at the same time. And there’d be no white robes, Bourdain would be wearing an old sweaty black t-shirt and jeans. The music wouldn’t be harps or even classical, but rock and roll. The food would not be grapes on a silver tray. You’d eat whatever it is with chopsticks, and a beer. Everybody would be dancing in the streets and having fun. And if it were really heaven, Bourdain’s insights would echo down those streets forever. 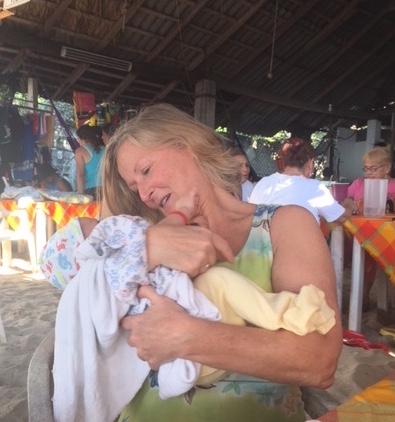 I have my own holiday tradition. Every year, I wait patiently, sometimes in a panic that it’ll never come. I confess there have been a few years when it never did. But in most of my 53 holiday seasons to date, I have managed to feel the “holiday spirit”, to grab onto something that warms my heart and demands that I forget the angst of the world and actually feel the comfort of holiday joy. Sometimes it’s nothing more than a nice exchange with a stranger in a store. Sometimes it’s a song I hear or some act of kindness I witness while driving. It has been a bit harder than normal this year to get into the holiday spirit because nothing about 2017 has been normal in these [not so] United States.

There have been eras when Americans were admired, when we were the heroes of the world, like when we helped liberate the concentration camps of WWII and defeat Hitler. But it is hard to be impressed with American intellect over these past couple of years. Not only is the world shaking its head at we moronic yanks, but many of us are slack-jawed at the lack of sophistication of our own. I know I could not be more disappointed in Americans. Even the half of us who are smart enough to understand the dangers of authoritarianism, have been impotent to do anything about it beyond posting on social media. And the other half thinks this division and hatred is making America great again. That was the U.S. in 2017, divided and conquered, sliced and diced. So it’s no wonder that the holiday spirit is eluding many of us this year. Our country, and thus our citizens, have let us and the rest of the world down, bigly.

So it makes perfect sense that I found my holiday spirit this year, not inspired by any Americans, but rather from people all around the globe. While American values, morals, and intelligence are difficult to admire these days, people came from different corners of the earth to help me find that elusive holiday spirit just as the desperation was setting in. Liberians helped me, as did Nepalese and Peruvians and Indians and Mexicans. Americans chanting for walls have been preventing me from feeling it, but the people some would love to keep out, showed me the way.

Just days before Christmas, The Matsiko World Orphan Choir warmed my heart and reminded me that children are the purest form of humans with genuine smiles and wonder and love. The word Matsiko, I learned, means hope, which was apropos because it gave me just that. Even the next night when I saw Hamilton, which is every bit as fabulous as the hype, it did not eclipse the power of these kids from Nepal, Liberia, Peru, and India that I had met the night before who truly lifted me up. These kids reminded me of the resilience we all have. They reminded me that there is truth, even if half of your neighbors don’t believe it. It exists, and it is all-encompassing and human. The truth isn’t politics or governance, but rather the inner-workings of we humans. A greeting in another language, a smile shared, a hug, honest gratitude. I was happily weepy in the presence of these strong and gracious children, and like the Grinch, I felt my heart growing. On a Mexican beach just 48 hours later, I deflected the swarm of vendors with the customary “No, Gracias”, only to have a 6 year-old kid named Eddie break through my tourista armor. Refusing to take no for an answer, he playfully walked a toy dragon up my arm with the biggest grin in the world, and again, my heart skipped a beat and I felt humanity in a way I’d feared I’d lost forever. And the day before Christmas Eve, when a Mexican family without hesitation thrust their newborn baby into the arms of my cousin when she complimented them on the baby. Again, it demonstrated that the openness and trust that I crave does indeed still exist even if only on a Mexican beach. Where I come from, to hand your month-old infant to a complete stranger is beyond trusting. And it was beyond beautiful. Even if they were being so generous because they thought we were Canadians, it was still such a caring gesture with nothing in it for them. Just humans being kind to other humans.

I owe my holiday spirit this year to Mexicans, Liberians, Peruvians, Indians, and to kids from Nepal. I turned to the world for a dose of humanity and it was right there, off screen. And it was comforting and gorgeous and every bit as real as the fake news that fills my head. I am grateful, so damned grateful that I encountered these people this holiday season. I had to turn away from home and ask the world for sustenance this year, and the world didn’t let me down. Even though America has let them down. And that gives me hope, matsiko. A promise of redemption in the new year. Hope that Americans will somehow regain our senses, that we’ll somehow come together to undo the division and remember that we’re more alike than different. Maybe the rest of the world will help us Americans get our hatred under control this year. Maybe the world will be there for America the way the citizens of the world were there for me this year. Maybe little Eddie will be there for America, with his big smile and his 25-peso toy dragon. Feliz navidad.